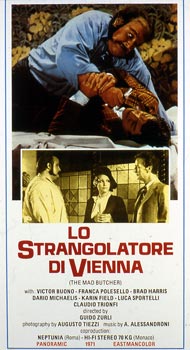 A soon as he's released from the mental hospital, the butcher Otto decides to return to business, so he settles down in his shop where he fits out a garret as bedroom. Here he's found one night by his wife while he is watching Gerta, undressing nextdoor. Otto stops the quarrel by strangling the woman, and to rid himself of the corpse he turns it into saucages, which become very successful, so Otto, who later kills a prostitute, uses her body in the same way. One night, after having murdered his brother-in-law, Brinner, who had discovered his crimes, the butcher gives hospitality to Greta, but she finds Brinner's body and realizes what has happened. To draw attention she drops some personal objects, a ring and some buttons, among the sausages. This is enough to make the policemen go to Otto's, just in time to prevent him from killing Greta