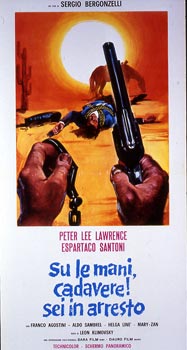 Sando Kid is sent to Springfield to clean out the adventurers who are dominating the area. Indeed, Grayton "il mancino", lord of the region, is seizing the lands of small-scale owners for speculation: the valley will soon be crossed by the railway and Grayton intends to become rich. Sando reaches Springfield, pretending to be a commercial traveller, but by night he becomes the protector of the small holder, harassed by the Mancino gang. Helped by his captain and Frate Bamba, he gets the proprietors to present an united front so that Grayton is forced to pay a fair price for every lot of land. Grayton soon decides to attack the stagecoach carrying the gold for the railway. But when the band attacks, they have the unpleasant surprise of finding Sando, the captain and Frate Bamba. Grayton's illegal activities have been discovered so at last, after a bitter fight, Sando handcuffs him after having killed him