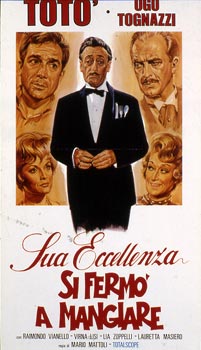 Totò is a well known thief. By posing as a "Dr. Tanzarella" he furnishes an alibi for Ernesto thus preventing Ernesto's wife from finding out about his mistress. Ernesto's wife mistakenly believes Totò to be Mussolini's private doctor. Totò learns that in a villa owned by Ernesto's in-laws a dinner in honor of a cabinet minister will be given and that golden cutlery will be used. Totò shows up with Lauretta. The minister tries to seduce her but gets scared when he learns she is the wife of Mussolini's physician. Through a series of hilarious circumstances the minister finds himself in possession of the cutlery that Totò hes stolen. Due to his "position", Totò prevents the police form arresting the minister. The police hands over the golden cutlery to Totò