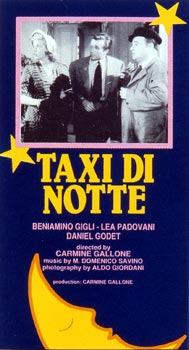 Nello, a taxi-driver, begins his night-shift. His first passenger is a girl in tears. Next comes a girl and a journalist who after a short fight for the taxi get in together, and, to their surprise, find a baby on the seat. The driver supposes that the baby has been left by the crying girl; he tries to reach her, but in vain. The baby spends the night at Nello's. The next morning Nello discovers that the crying girl is a rich industrialist's daughter; the father wants her to marry a stupid nobleman even though the man that she really loves is an employee of her father's firm. Nello goes to visit the industrialist to clear the mistery of the lost baby. After a long discussion he finds out that the baby doesn't belong to Luisa the industrialist's daughter, but had been abandoned in the cab earlier that evening. Luckily, due to Nello's intervention, Luisa will marry the employee while the girl and the journalist decide to marry and adopt the baby