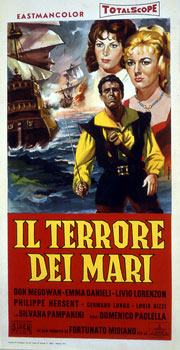 Jacques, loyal helper of the Governor of Maracaibo and fiancé of his daughter Elisa, miraculously escaped Guzman's killing fury. The latter, mad about Elisa's refusal to marry him, seeks revenge at all costs... but our hero, helped by the pirate Rock called "the Brazilian", not only survives the tortures of the Spanish troops, but kills his enemy in a breath-taking duel. Peace will reign again over those troubled waters... and the two lovers can sail away towards the horizon!