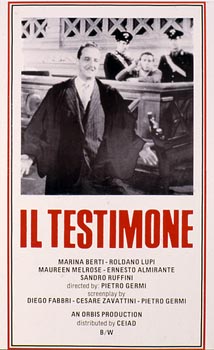 A supposed assassin is about to be condemned to death due to the evidence given by a witness who is convinced of the infallibility of his watch. But when he realizes that his watch, like all manmade things, is liable to make mistakes and be defective, he hastens to take back his claim and to absolve the accused. The accused is in fact freed, but despite leading an easy life with a woman who loves him, the man is not happy. His conscience nags him and he becomes so obsessed with the thought of the witness in whose hands his life once lay that he decides to kill him. However, he is incapable of doing so and after an inner crisis he returns to prison of his own free will to pay for his guilt