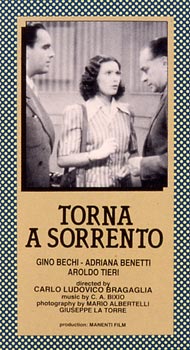 Mario Bianchi is a travelling salesman who mistakenly collects a letter at the post office for another person of the same name. In this letter a young girl writes to her boyfriend saying that, after numerous arguments with her parents who are contrary to their engagement, she has decided to leave Sorrento and join him in Rome. She indicates the time and arrival of her train and asks him to meet her at the station. Not knowing what to do, Mario goes to the station to explain what has happened, but once there he finds she knows no-one and has nowhere to go. He offers to help her look for her boyfriend but their search is in vain. In the meantime, Mario discovers to be a talented singer and is offered a contract with the radio which he accepts. Romance is in the air, so the film ends with the girl asking her father's forgiveness and marrying Mario