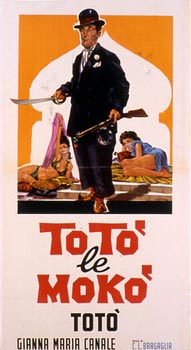 A famous gangster named Pepè le Mokò, boss of a large part of the Algiers' kasbah, is killed by the police. His place is thus offered to his next-of-kin, Totò, a musican from Naples. Totò's only dream is to direct a musical band, so when he is offered to head Pepè's "band", Totò accepts with delight. On arrival at Algiers, Totò has programmed a concert but the band of criminals he is directing believing them to be musicians, is forced to flee from the police. There is a large police search in the Kasbah for Totò who with a miraculous lotion on his hair becomes brave and fearless. Behaving as a true hero he becomes the Idol of the Kasbah and wins his favourite girl's heart. But a jealous lover of hers cuts off his hair during the night and with it all his courage. When he awakes he sees that it is Pepè who is still alive. Due to the shock, he throws himself at Pepè and kills him along with the rest of the gang. With the reward money he returns to Naples, where at last he can direct a real musical band