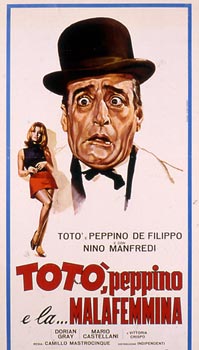 Gianni is a bright boy who goes to college and his peasant family has high hopes for him...until he goes running off to the city with a blonde bombshell! Chaos reigns. He leaves his mother worried to death and his two uncles, Totò and Peppino, clucking about like two mother-hens. Eventually they all rush off to rescue their wayward chick from the evil clutches of the big bad blonde! The uncles create havoc wherever they stumble and their bumbling efforts prove totally inefficient but very funny. Meanwhile, Gianni's mother has decided that Marisa is not such a monster after all and that a wedding would be a wonderful idea!