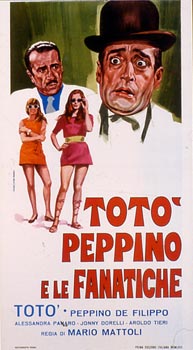 This time the dynamic two have managed to get themselves locked up in a mental asylum and are trying to persuade the supervisor that their wives had forced them to dress up as clowns and ask for donations on the street to raise money for charity. The two were actually doing well until they decided to collect from passing car drivers and caused the most almighty traffic jam. It was then that they were cessied off to the looney bin. After considering the men's case, the head doctor comes to the conclusion that it is not they, but their wives who are in need of a little cerebral adjustment! So Totò and Peppino are allowed free and their wives are taken into care