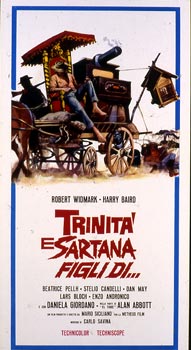 Trinity and Sartana rob a bank in the town of Quintana. The townsfolk and the farmers in the area are tyrannized by Barton and his gang. After the bank robbery, Trinity leaves with the money but gives it away to some poor farmers. He returns to Quintana and joins Sartana. They learn of Barton's plan to rob the fortress of La Peluca along with a Mexican gang. Trinity and Sartana arrive first and defeat the Mexicans, but as they are leaving with the two million dollars the rangers arrive and, thinking they saved the money, acclaim them as heroes