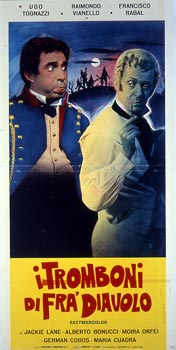 A nice story of romance and adventure. Napoleon's forces move into Italy, king Ferdinand flees and Fra Diavolo, the brigand, is forced to defend his property. Col. Chamonis has occupied the castle of Arrigo Forzano whose daughter Cristina is secretly betrothed to Fra Diavolo. Cristina is taken prisoner by the French who, knowing of Fra Diavolo's love for her, threaten to execute her if he does not give himself up. They prepare a trap for him in the Capucin monastery where he and Cristina have planned to be married - but just when the French think they have cornered him, the crafty brigand escapes taking his beloved Cristina with him. In an idyllic ending the two lovers marry and free themselves of their French oppressors