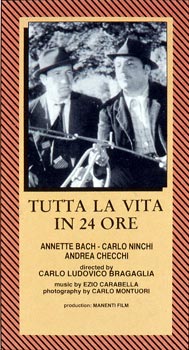 A young man has a quarrel with his friend and during the quarrel a shot escapes from the revolver. On the train going to Rome, he feels he is being followed by a commissar of police, and in a fit of nerves he lets out the whole story to the commissar, who is only on the train because he is going on holiday. When the commisar hears the story, he is obliged to accompany the man to prison. During the rest of the journey to jail, they stop in a house where there is a sick child, and the young man gets to know that this child was born after his short relationship with its mother. At this point the young man decides to marry the woman, everything is fixed up straight away and, as soon as the ceremony is over, the commissar is obliged to conduct him to prison. At the police station the man learns with much joy that the day of his fight the pistol was loaded with a blank. After all these adventures the young man is happy to settle down with his family peacefully