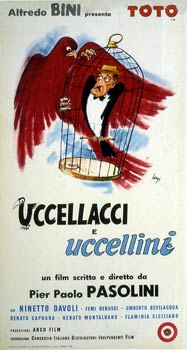 On their way to collect the rent from poor people who live eating birds' nests, Totò and Nicola are accompanied - against their will - by a talkative and polemic crow! Convinced by the bird, the two decide to start a monastic life and - like Saint Francis - after several efforts start to speak with the animals! After becoming ordinary men, again they continue their strange trip - this time witnessing popular revolts and funerals of socialist leaders... until, at last, when they have becouse hungry due to their long march the two kill the crow and eat it!