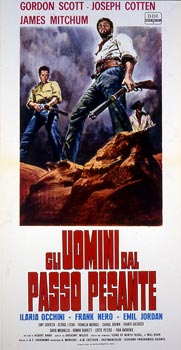 After the war of secession, the aging Cordeen, who owns thousands of acres in Texas, rules his numerous and quarrelsome sons with an iron hand. He sends them out to deal with the threat of the representatives from the North. However, not all the sons share their father's unlimited hatred for the Northerners and they find it increasingly difficult to obey his despotic commands. To add to the family's unrest, a prodigal son decides to return to the fold, provoking two other sons to down tools and leave. Cordeen, outraged, pursues them and tries to kill them. An absurd family feud ensues, prolonged by the participation of the entire Cordeen family. When the dust has settled, only two of the sons are left standing