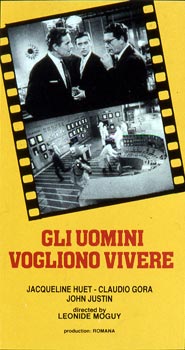 Charding, a nuclear physicist designs some of the most catastrophic atomic weapons ever known to man, but he is heading for a personal disaster which may have world-wide repercussions: he is so totally absorbed in his work that it is not until his son is dying of leukemia that he actually takes any notice of his family. However he is too late to do anything for his son, who subsequently dies. Disgusted with himself, Charding gives his work up and returns to France. He is pursued by his colleague, Rossi, who is only interested in the money to be earned from the project, and who tries to persuade him to continue with it. Charding turns on Rossi in anger and remorse and accidentally kills him. He is acquitted by the judge because of the exceptional circumstances, and returns to his wife to make a new start