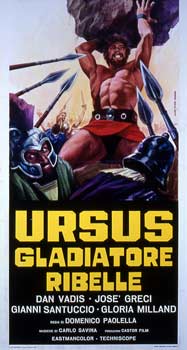 When the wise Emperor Marc Aurel dies, his son Commodus inherits the throne. Unlike his moderate and understanding father, Commodo seems to care only for the gladiator matches and violence of all sorts against local tribes. His vanity will soon be shaken when giant Ursus challenges him in the arena... But the final defeat will be brought about by the hands of his own soldiers - disgusted by his unfairness and dictatorship! The hard times are over; with Septimius Severus peace will again reign in Rome