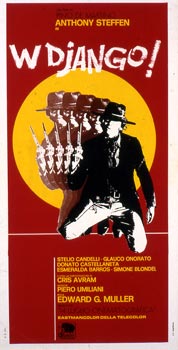 In a village near the Mexican border there are two rival gangs headed, respectively, by the american major Winchester Jack and the Mexican general Hogo Rodriguez. Django, a pistolero with a personal vendetta against Winchester, arrives in the Saloon and kills most of his men, using a machine-gun hidden in a coffin. Then Django tries to get some money out of Hogo, but not succeeding, he steals it and flees with Norma, his lover. The general overtakes him, kills Norma and smashes Django's hands Hogo and his men are killed by Winchester. Once Django has recovered, he kills the major with all his surviving men