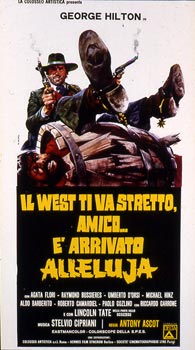 Ramirez, the general of the Mexican revolution against Maximilian who has been appointed king of Mexico, organizes his forces to attack the king's General, Miranda. Ramirez realizes that the Aztec Indians would be allies of great value, so he offers to return to them an idol statue that has been stolen from them. The only man capable of retrieving the idol from the thieves is known as Alleluja, the fastest gun in the territory. Ramirez commissions Alleluja to proceed. Alleluja gets the idol, but he is cunning and devious and makes deals for the statuette for the best price with others, one being a rich businessman, Ferguson. Ferguson wants to give it to Miranda. Alleluja is holding back the genuine idol and dealing with a fake. The Aztec chief knows this. In the end Alleluja fulfills his commission and delivers the idol to General Ramirez. An exciting historical western