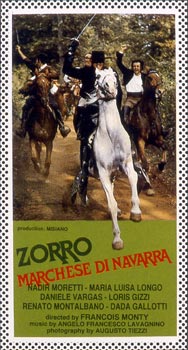 Zorro has received a mask and a sword from the exiled king Ferdinand VII, and from that moment he becomes the standard-bearer of oppressed Spain. The French troops attempt to put a stop to Zorro's deeds, which become more daring every day. His disguises are unpredictable, thus it is not only difficult to seize him, but also to give him a name. Meanwhile, the revolt winds gradually through all the country. Colonel Brizard becomes more and more ruthless. In order to frighten the population, he plans to kill a group of patriots. But Carmen, the niece of the Alcade of the city, gets involved in this affair. However, the French Army is now routed and Brizard prepares to flee, taking Carmen with him as hostage, but Zorro intervenes yet again. There is no escape for the tyrant. Ferdinand VII re-enters Spain victoriously and he nominates Zorro Alcade of Pamplona and Marquis of Navarra for services rendered.