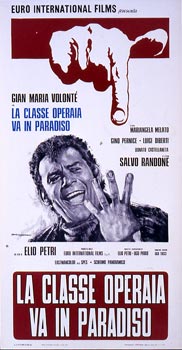 Massa is a model workman that alinates all his companions. But everything changes when he is the victim of an accident at work. The solidarity of the other workers makes him assume such an extreme position that he gets.. fired. The factory is paralyzed by strikes; the workers not only want the renewal of their contract, but the reassumption of Massa. But it is in vain. Suddenly he is offered the chance of returning, on condition that he enters the factory during a strike. Massa accepts, but in the morning, faced by his companions crowded round the gates, he hasn't the courage to enter and prefers to kill himself. Now, behind the enclosing wall which looks on to the infinite, others like himself are waiting to enter. But they are not wanted inside, they are told that they are not worthy. The struggle goes on for Massa, and it is hard, but he isn't afraid, he wants to go beyond those gates which still keep him out of Paradise.