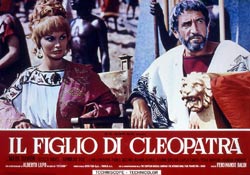 During the reign of Emperor Octavian, El Kabir, son of Ceasar and Cleopatra, is defending the Egyptians from the cruelty of Governor Petronius. In order to avoid the Emperor's punishment, Petronius must kill El Kabir, but his plans fail and he dies. El Kabir, aware of the rightness of his cause and strong of his noble origins, regains respect and justice for his tribe... Satisfied with the results, our hero and his beloved Livia - Petronius's daughter - return to his homeland: the desert