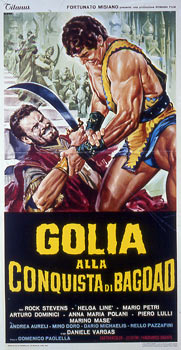 Goliath is given a dangerous and difficult task by King Selim: free his daughter Miriam kidnapped by the enemy. Having found the hiding place with the aid of a merchant, Goliath and his wrestlers kill the guards... The final battle will take place in Bagdad, where once again our hero gives a demonstration of his almost supernatural physical strength! Selim regains his reign, but too old and tired abdicates in favor of his daughter... Queen Miriam will marry a noble King and peacefully reign for several decades!