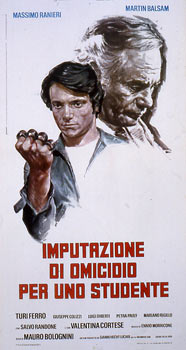 During a students' revolt, an officer and a young man are killed. According to the police, Massimo is responsible for the death of the officer... and tried for murder! Judge Sola, charged with the investigations, learns - much to his surprise - that his son Alfio is the criminal they are looking for!! Struck by this revelation, the Judge frees Massimo and resigns from service... not strong enough to jail his own son, he throws the proof of his guilt in the river...