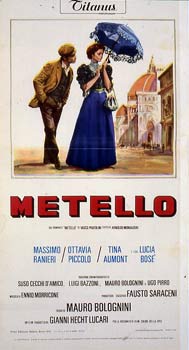 Metello, a young construction worker, is arrested for having caused a conflict with the police, during the funerals of a fellow anarchist whose daughter he marries once released from prison. When the socialist movement's and trade union's revendications become popular in Florence, Metello and his fellow workers organize a major strike. Just before their conditions are accepted by the authorities, in another riot against the police our hero is arrested again... Will he learn the lesson? That's what he promised his wife...