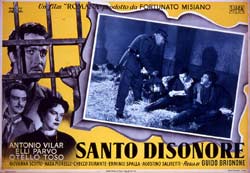 Rome 1870: Pietro participates in a secret conspiracy to help the troops take the city, but that same night his father is killed with Pietro's knife! Not being able to provide an alibi without mentioning the conspiracy, he is defended by friends and relatives throughout the trial. Condemned to 30 years of prison, he manages to escape and later on finds out that his best friend, Alfredo, was the true responsible! While trying to steal secret documents to pass to the police, he was seen by Pietro's father and...