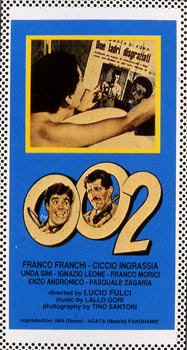 Popoff, a spaceship, is launched from a Russian base to the moon with two astronauts: Frankovic and Ciccionia. Suddenly, all contacts with the ship are lost. This leads the men at the Soviet Mission Control to assume that it has been destroyed. Hoping to hide the failure of their mission, the Soviets decide to launch a second spaceship, carrying two men: two Italian petty thieves, Franco and Ciccio, who resemble the lost astronauts perfectly; they are located by Russian agents, sent to Russia and launched into space. At their return they are met by the wives of the real Russian spacemen who attribute their presumed husbands' strange behaviour to "space-shock". To complicate matters, the real Frankovic and Ciccionia suddenly return to the base. From this point on, a series of misunderstandings occur, resulting in the Russians' sending Frankovic and Ciccionia "back to Italy" while the two bogus cosmonauts settle down in Russia