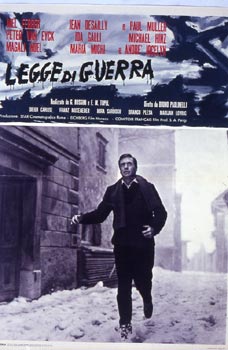 The story takes place in Italy in 1943. After an ambush on a German military train, during which three German soldiers are killed, the German commander orders thirty men to be killed if the responsible of the ambush doesn't give himself up within one hour and a half. The teacher of the nearby village, who has organized the ambush, doesn't know what to do. On the one hand he is horrified at the idea that thirty innocent people will lose their lives for his actions, but the partisan commander who has ordered him to carry out the ambush has also told him not to give himself up, because sabotage is normal during wars and in this way the Germans would be the sole responsibles for the massacre. Due to the arrival of reinforcements, it has become impossible to free the prisoners with a partisan raid, and so those who have one of their family among the prisoners decide to go and look for the real responsibles. The watchmaker of the village is arrested and the hostages are freed. The new aspect of the tragedy forces the teacher to find a heroic solution to the dilemma of his conscience. He cannot permit an innocent man to be killed in his place only because people need a scapegoat: this would be nothing less than a murder. He goes to give himself up to the Germans, who shoot him in front of the church after having freed the watchmaker