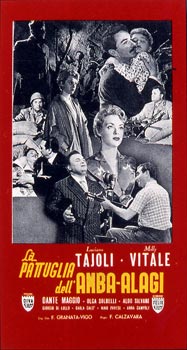 Luciano is the sole survivor of the Amba Alagi battle. A member of his squadron, Mario, deserted on the eve of the battle. Crippled by wounds after a long imprisonment, Luciano returns home to keep a promise made to his fellow soldiers to trace their families. He begins a long journey through Naples, Sicily, Tuscany and finally arrives in Milan where Maria, the wife of Mario, lives. He himself, as a young boy, was once in love with Maria and now he feels sorry for her and decides not to tell her about her husband's desertion. Very soon Mario turns up again. He has been with a gang of smugglers all this time and is now blackmailed by them. The leader of the gang has been following him and, just as he is about to shoot him, Luciano jumps to his defence and is fatally wounded in his place. An interesting film with very good repertoire material