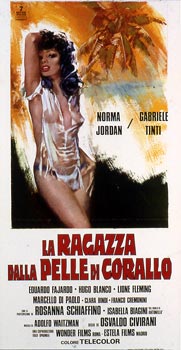 Fabrizio has arrived in Santo Domingo to study new methods of tobacco plantation. He is put up by an American called Barrymore who, feeling obliged to provide him with a little female company, introduces him to Mayra, a beautiful mulatta. Life is just too good for Fabrizio who decides to accept a job offer made to him by Barrymore, and to settle down in the french West Indies with Mayra, sending his wife back home packing on the phone. But life isn't as simple as it seemed. Firstly, unknown to him, Barrymore's business, false foreign currency trading, is illegal and, secondly, the American's business partner, a Puertorican called Josè, is wildly jealous of Fabrizio's relationship with Mayra. Before Fabrizio knows where he is, he is being both led by the nose by his host and pursued by his hot-blooded rival. Luckily for him though, Mayra and the police demonstrate slightly more common sense than he and they save him from either jail or execution