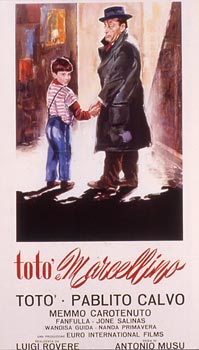 Totò meets a little boy whose mother has just died. The little boy is sent out begging by his cruel uncle, but when Totò finds out he gets the uncle imprisoned. The uncle's wife tells the little boy his mother is in hell, so the little boy tries to burn Totò's house so he can join her there. But Totò arrives just in time and convinces the boy that his mother is not in hell