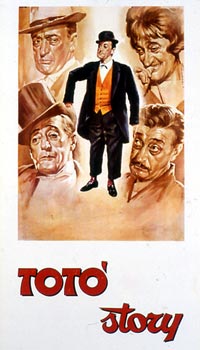 This film is a series of episodes chosen from some of Totò's best films. In the first episode we see Totò torn between his duties as a soldier and love, in the second he plays the part of the uncle from Sicily who goes to Milan to convince a music-hall singer to leave his nephew alone; in the third he tries to conquer the queen of Atlantis's love, in the fourth we see him busy in the vain attempt to get money from his brother to build a tombstone for a person who is alive and well; in the fifth episode Totò finds a way of passing a few enjoyable hours at the expense of his wife but he is found out, in the sixth we see him as a well-mannered but shrewd butler, in the seventh he tries various disguises in order not to pay rent and in the last one Totò arrives at his own son's wedding due to an exchange of clothes