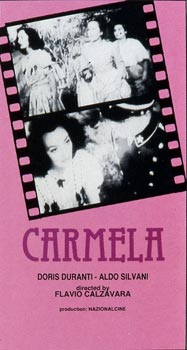 On a small Mediterranean island young Carmela falls in love with the captain of a small troop of soldiers who, after promising to marry her, leaves without warning and without even writing to explain his reasons for the sudden departure. Carmela is so shocked and distraught by this event that she suffers a nervous breakdown which leaves her mentally unbalanced. After some time, a new officer arrives on the island and, in her sick mind, Carmela believes him to be her boyfriend who has returned to her. The young officer feels sorry for her and goes along with the game so as not to spark off a new crisis in the girl but, eventually, his pity turns into sincere affection which serves to heal Carmela's sick mind completely.