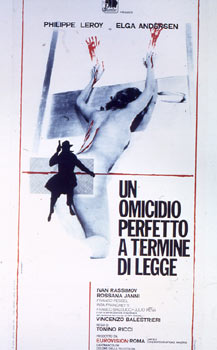 Marco Breda is a champion at offshore races and owns a factory where motorboats are produced. He is badly hurt during a race, because his boat has been sabotaged by someone. He is immediately taken to the hospital and operated, but his memory is left blank and Marco is tormented by nightmares which bring him on the verge of madness. The best friends of Marco and his wife, Monica, are Burt, the co-owner of the factory, and Terry. This friendship, however, causes suspicion and doubts: Marco believes that Monica has an affair with Burt, and Monica thinks that Marco is in love with Terry. During a quarrel, Monica is killed: Terry convinces Marco to get rid of the corpse. But Monica reappears as if nothing had happened and Marco, shocked, flees with his car and falls into the sea. Monica, however, finds out that Burt and Terry have been married for a long time and she understands their plan to get rid both of Marco and of herself. She kills them both and then, due to a stupid accident, loses her life as well. But Marco was not dead and he can be saved. He returns home alone, but free from his nightmares and ready to start a new life