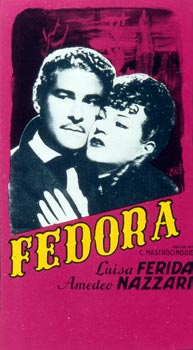 Princess Fedora and Prince Vladimir are going to be married, but the day before the wedding the Prince is murdered. Fedora swears solemnly in front of his father that she will avenge her fiancè and, given a few vague clues, she starts her investigations. After vain researches from one country to another, Fedora finds herself in Paris where she falls in love with a russian painter who is really the murderer she's looking for. Having discovered his true identity she reports him to the authorities in spite of her love. Later she finds out from the painter himself that the motive of the murder was different from what she had thought: in fact, Vladimir had dishonoured the russian painter. Fedora is sorry for what she has done and would like to make up for it, but her report to the police has caused the deaths of the mother and brother of the man she loves and, desperate, she kills herself.