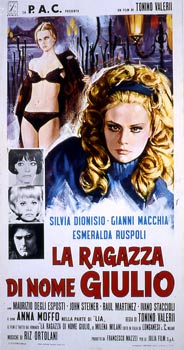 Venice: Jules, abruptly cancels the ceremony on the day before her wedding, to meditate on the reasons of her failure as a woman. Raised by a beautiful but corrupt governess, her first boyfriend, Lorenzo, was too shy to dare touch her. The following negative experiences with men and a mixed feeling of attraction and horror towards the opposite sex pushes her on the edge of madness... as a final avenge, she decides to seduce an unknown man to... mutilate him horribly!!